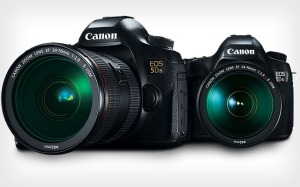 DxOMark published its sensor test scores for the 50.6-megapixel Canon 5DS and 5DS R DSLRs today, and the news is both good and bad for Canon shooters. On the good side, the cameras scored the highest scores (87 and 86, respectively) ever achieved by Canon sensors. On the other hand, they still lag behind the Nikon D810 and Sony a7R (97 and 95, respectively) in overall quality.
Here’s the score breakdown comparison between the 5DS, D810, and a7S:

“Sitting outside the top 20 in the rankings, the headline scores for the EOS 5DS suggest that it’s far behind the best sensors we’ve tested,” DxOMark writes.

The D810 and a7S handily beat the 5DS and 5DS R in color depth, dynamic range (at low ISOs), and low-light ISO performance.

“With its massive resolution and best results in print, the EOS 5DS and 5DS R are great solutions for photographers shooting at low ISO sensitivities for large scale prints,” DxOMark says, but if dynamic range is more important to you than 50.6 megapixel photos, there are better alternatives out there.